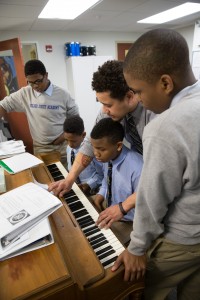 Who may apply for admission to Chicago Jesuit Academy?

Chicago Jesuit Academy serves students with a wide range of skills and abilities.  Some of our students were earning good grades at their previous schools, but they were not being adequately challenged or prepared for the rigors of college prep high schools.  Other CJA students were not finding academic success in their previous schools, which lacked the structure or the individualized care that these students needed to succeed.

To be considered for admission to Chicago Jesuit Academy, a young man must have successfully completed the prior grade, and qualify for the National School Lunch Program’s free or reduced-price lunch or not otherwise be able to afford a private, college prep education.  Strong candidates have the support of a family member who shares the student’s desire to succeed.  Transfer candidates should contact CJA at (773) 638-6103 or apply@cjacademy.org for information about the transfer application process.

Why is Chicago Jesuit Academy an all-boys school?

Since the creation of the first Jesuit Nativity-model middle school in 1971, we have found that our students find success more easily during the middle and elementary school years when they can learn in a single-sex environment.  Parents and community leaders from the neighborhoods Chicago Jesuit Academy serves requested that CJA begin as a school for young men.  They believed that boys were in greater need of such a resource than the girls in their respective neighborhoods.

Can a student with an Individualized Education Plan (IEP) or 504 Plan attend Chicago Jesuit Academy?

Chicago Jesuit Academy has extensive student-support services that include a Learning and Reading Specialist, full-time social workers, social work interns, a full-time school nurse and a dean of students who coordinates student care.  CJA has enrolled and graduated students with pre-existing IEPs and 504 plans, and we encourage parents to speak candidly with the leadership of Chicago Jesuit Academy about the individual learning needs of their child.  CJA does not have the resources to serve children with profound learning or behavior disorders.

What does it mean that Chicago Jesuit Academy is a Jesuit faith-based school?

Chicago Jesuit Academy is a Jesuit, Roman Catholic middle school that admits students of all faiths.  We have enrolled students who are Roman Catholic, Protestant and Muslim as well as students whose families do not participate in any organized religion.

Chicago Jesuit Academy does not proselytize, but CJA does bear witness to the idea that we find God in and through each other and all things.  Our actions are inspired by our faith.  We believe that every child is sacred and made in the image and likeness of God.  For more information about the Jesuits and their commitment to living a faith that does justice in the service of others, please visit https://jesuitsmidwest.org/.

What does it cost to send a child to Chicago Jesuit Academy?

Families do not pay tuition to attend Chicago Jesuit Academy.  Each student receives a full scholarship which funds the entirety of the cost to educate them and is paid by an individual, corporation or foundation.  As a full-scholarship school, Chicago Jesuit Academy succeeds because of the disciplined and generous sacrifices made by our students, parents, faculty, staff, volunteers and benefactors.

Why does it cost roughly $28,600 to educate a student at Chicago Jesuit Academy?

Chicago Jesuit Academy provides a suite of services that are unavailable in traditional middle schools.  We keep our class sizes very small to address the learning needs of each of our students. Prior to the seventh grade, our students attend classes in learning groups of no more than fourteen students.  This individualized attention produces incredible results.  It also increases the cost of educating our students.  In addition to benefiting from small classes, CJA students participate in mandatory co-curricular activities and benefit from an extended 9.5-hour school day that includes three meals and a mandatory study hall. These resources are available to our students during an eleven-month school year and are included in our $17,500 scholarship and $28,600 per-student operating expense.  As a cost comparison, Chicago Public Schools (CPS) spent $14,923 per student in FY2016 or $5.691 billion in operating expenses for 381,349 enrolled students.  North and west suburban public elementary schools in Illinois spend substantially more.  These school systems have school days that are approximately 3.5 to 4 hours shorter than a school day at Chicago Jesuit Academy.  Their class sizes for the fifth and sixth grades are more than double those found at CJA, and their school years are also nearly 2 months shorter than a CJA school year.

What is the general profile of a student who transfers to Chicago Jesuit Academy?

Chicago Jesuit Academy seeks to partner with families who want their child to attend an excellent, faith-based college prep school but lack the resources to pay for such an opportunity without a scholarship to CJA.  We are not selective based on a student’s academic history in grades 3-5.  Instead, we seek to enroll students who are motivated to take advantage of the new opportunities available to them at CJA.

Since CJA’s founding in 2005, we have enrolled students who tested in the 1st through the 99th percentiles on their standardized basic skills tests in the fourth grade at their prior schools.  Some of our students were unable or barely able to read when they enrolled.  Others have been ready for work beyond their grade level.

Do students transfer to CJA from Chicago Public Schools or Catholic schools?

Almost all of our students transferred to CJA from Chicago Public Schools.  Chicago Jesuit Academy was designed to be an additional Catholic educational resource for young men who could not otherwise access a high-quality, faith-based education.  We strive to work in careful partnership with the Archdiocese of Chicago and long-standing Catholic elementary schools on the West Side like St. Malachy, St. Catherine/St. Lucy and St. Angela in order to increase access to excellent, faith-based education on the West Side to students who could not otherwise afford it.

How is Chicago Jesuit Academy funded?

Chicago Jesuit Academy relies entirely on the generosity of benefactors in order to cover our operating costs.  The majority of our funding comes from individuals and family foundations who believe that the children we serve should have access to an outstanding faith-based college prep lower and middle school.

What neighborhoods do most of your students come from?

Approximately 75 percent of our students come from Austin, Garfield Park and Lawndale — three of the neighborhoods on Chicago’s West Side that are closest to our campus.

Catholic schools around the city are closing and relocating to the suburbs.  How is Chicago Jesuit Academy able to remain open?

We have been very fortunate that generous people who have had the benefit of a quality, faith-based education want to help make that same education accessible to children on the West Side of Chicago who come from modest economic backgrounds.  Our benefactors want to make certain that the same opportunities they had at places like St. Ignatius College Prep, Loyola Academy, Fenwick, Resurrection and Loyola University will be available to the young men we serve if our students choose to work hard to earn an education.  Our benefactors see this as a justice issue.  They want to make certain that no child is kept from a great education simply because of where they happened to be born.  We are grateful to these benefactors who have made Chicago Jesuit Academy a reality.