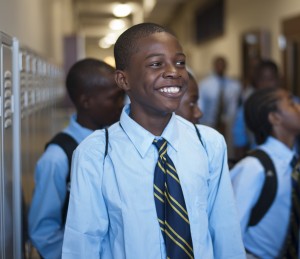 Mission: Chicago Jesuit Academy (CJA) is a full-scholarship lower and middle school for young men from modest economic backgrounds who could not otherwise access a well-resourced, faith-based college prep education in the Catholic tradition. We support and advocate for CJA students and alumni as well as other children of modest means as they progress to and through college prep high schools, post-secondary education and the transition to meaningful careers and citizenship. CJA invites students to become persons for others who aspire to be open to growth, loving, intellectually competent, religious and committed to doing justice.

Means: Located in the Austin neighborhood on Chicago’s West Side, CJA enrolls students without regard for their past levels of academic achievement. We use small class sizes, rigorous extended school days and an 11-month school year to develop each student as a whole person in accord with the Jesuit mission and tradition. CJA shares best practices with other schools, and we partner with the broader community to promote access to better educational resources and a deeper understanding of the obstacles to educational equity. The disciplined sacrifices of CJA’s students, alumni, parents, faculty, staff, volunteers and benefactors make the success of our mission possible.

In order to qualify for admission to CJA, each young man needs to have passed their previous grade and qualify for the free or reduced lunch program or his family must be experiencing an extraordinary financial hardship. CJA seeks to serve students who could not otherwise afford a private education. The median household income for our families is $23,882.

Chicago Jesuit Academy serves students regardless of their past academic achievement. CJA has enrolled students spanning the 1st to the 99th percentiles on their standardized basic skills tests at their prior schools.

In 2005, the Archdiocese of Chicago agreed to partner with the Jesuits in Chicago to create Chicago Jesuit Academy – the sixteenth Jesuit Nativity school in the country – as a demonstration project in urban Catholic education on Chicago’s West Side. Like students at other Jesuit Nativity schools, our students use small classes, extended academic days and an 11-month school year to prepare themselves for success in college prep high schools, colleges and positions of community leadership.

The sixteen Jesuit Nativity model middle schools operate throughout the country in cities including New York, Boston, St. Louis, Milwaukee, Baltimore and Washington, DC. Nativity alumni have earned admission to outstanding universities including Boston College, Brown, Georgetown, Holy Cross, the University of Chicago, Johns Hopkins and Marquette University. Ninety-four percent of Nativity alumni earn their high school degree. Eighty-nine percent of those who earn their high school degree enroll in a college or university. Within the Nativity model, the Jesuits have been able to work in partnership with Catholic dioceses across the country to replicate this innovative model of urban Catholic education. 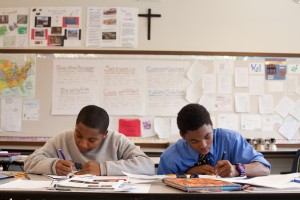 Like St. Ignatius College Prep, Loyola University Chicago, Loyola Academy and Cristo Rey Jesuit High School before it, Chicago Jesuit Academy educates students in Chicago to be “men and women for others” in the Jesuit tradition. Chicago Jesuit Academy students receive a level of personal care or cura personalis that is the hallmark of Jesuit education.

For more information about the Jesuits and their commitment to living a faith that does justice in the service of others, please visit: www.jesuits-chgdet.org.